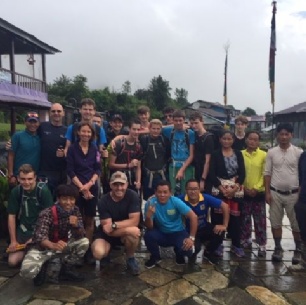 Update from the Headmaster:

I am delighted that all pupils and staff attending the month-long World Challenge trip to Nepal have now returned home safely after a hugely successful and exciting adventure, in which they contended with torrential rains causing major land-slips, and even a local earthquake, to reach the base-camp of Annapurna and to support a school in Kathmandu.  Their blog has been fascinating, and it has been excellent to share with a wider audience their exploits, experiences and progress.  I have felt extremely jealous and congratulate every participant on the challenges they have overcome, together as a team.  Their rest is well-deserved!

The group have been navigating their way through the chaotic streets of Kathmandu, learning from the locals! With certain roads and intersections being non-stop, the group soon worked out that the most efficient way to traverse the madness was to hop on a Tuk Tuk to from one hotel to the next.

All students to be collected from Heathrow Airport, 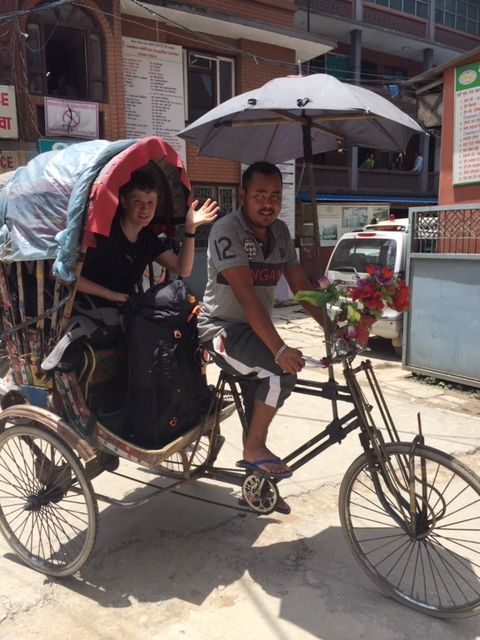 No written update from our adventurers, but some new pictures to give you a flavour of their travels. 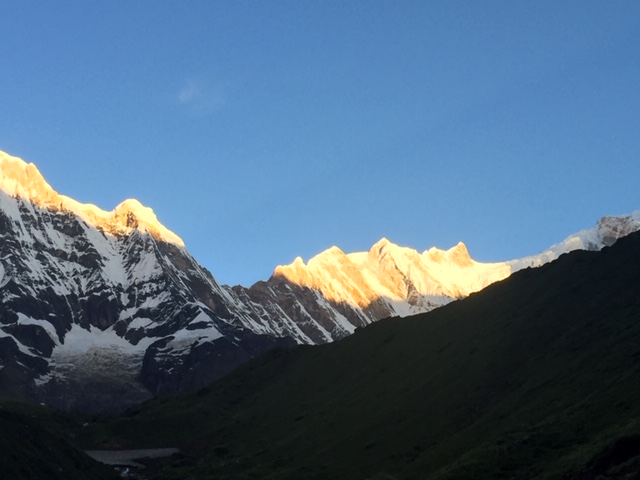 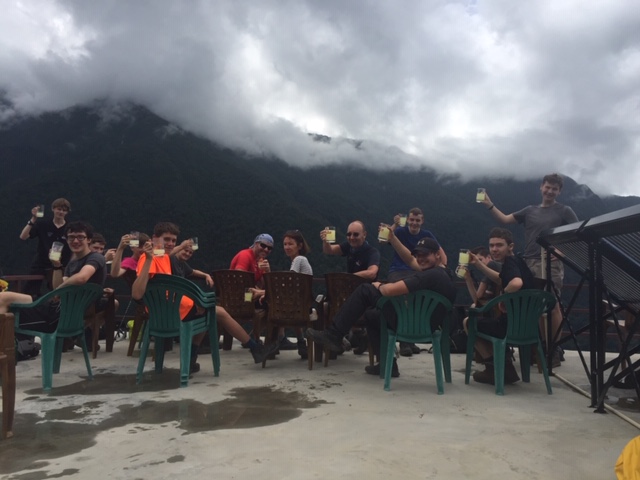 From Chomrong the group descended to Chomrong river where they crossed via a bridge built by the Gurkhas. From here they ascended through a rhododendron and bamboo forest, crossing a bridge at Sinuwa where they passed over several old avalanche chutes before reaching Dovan.

Like each day on the trek the group were awake at 5.30am before greedily eating their breakfast an hour later, once their stomachs were fully lined they set off for a slightly shorter 4 hour trek. For one of the first times on the trip the sky was mostly clear and they were able to make out fishtail mountain in the distance. A spectacular view and well worth the blisters!

The trek wound around and up the valley passing through dense bamboo forests and around towering waterfalls. Eventually we entered a more glacial landscape with freezing cold raging rivers and steep slopes, wobbly wooden bridges to contend with and finally reached our destination. 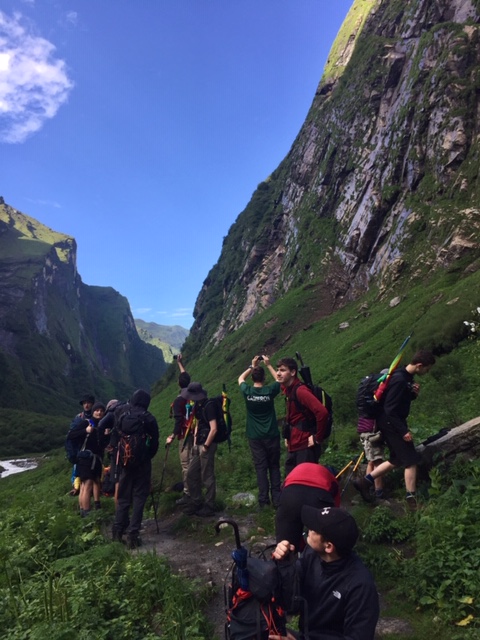 Waking at the usual early hour, and ready to go on a feast of cheese omelette and Tibetan bread with honey, a 2 1/2 hour walk lay ahead to Machapuchare Base Camp (MBC). The walk was made more enjoyable due to the sun making a rare appearance which, in turn, made the wobbly wooden bridges slightly more bearable!

We reached MBC with the sun still shining, enabling everyone to capture amazing images of the mountains. We enjoyed an early lunch of noodle soup before starting the trek up to Annapurna Base Camp (ABC). On the walk we crossed over ice glaciers - a breathtaking experience.  On reaching ABC more pictures were taken at the sign.  Then onwards and upwards hoping to see more at the next viewpoint, however, this was not to be.  After an hour of waiting, the cloud coverage showed no signs of dissipating, so back down the mountain and back to MBC and an overnight stay, before embarking on the next leg of the adventure. 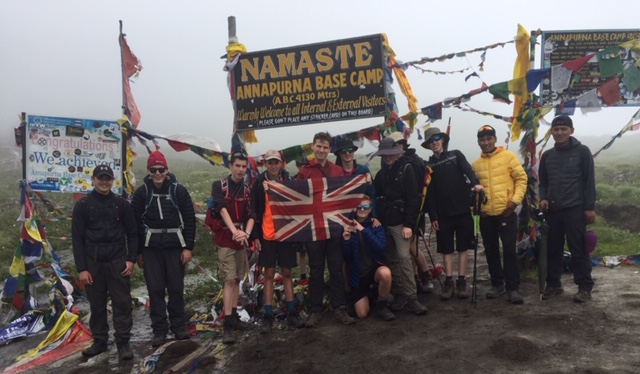 The group get higher and higher on their trek and are awarded with this view of Machapuchare, more commonly known as Fishtail Mountain - where no human has ever set foot. 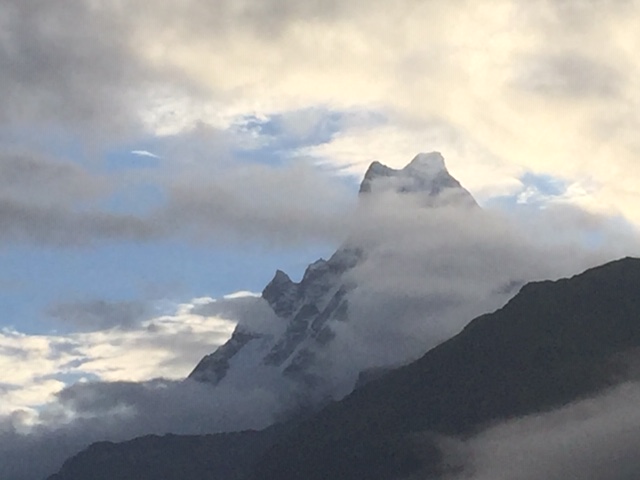 Lots of steps today 3200 in one go was a bit of an effort but the group successfully negotiated them.
Ghorepani means ‘horse water’ and was a popular stop for the mule trains carrying goods along the mountain trails. 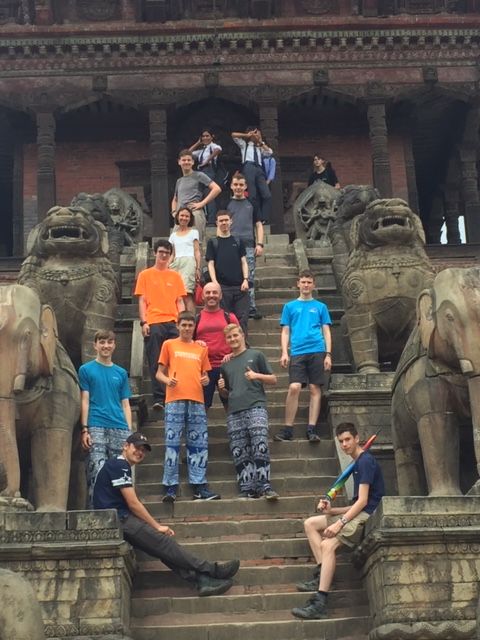 The group decided to pass on the early morning excursion to Poon Hill as the weather forecast was not good. Most people go to Poon Hill to see Annapurna but as we are trekking to Annapurna Base Camp (ABC) we will have better views of it without putting ourselves in the way of possible torrential weather.

The boys now know the meaning of Nepalese waves: up and down ridges and valleys!  Lots of steps again but not like yesterday.

Today’s tea house had a nice wood burner to keep everyone warm in the evening but no electricity!  An early night.

In the morning at breakfast the clouds broke and and with that came amazing views of Machapuchare (known as fishtail mountain) 6993m.

Tadapani means ‘far water’ as the village water supply is a long distance below the village. 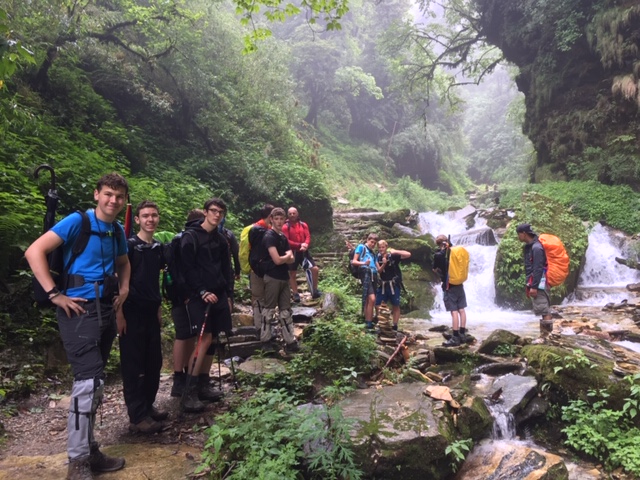 The Gtopu descended down to the river at Kimrong and crossed over a new suspension bridge constructed by the Gurkhas - the first of two crossed today. After lunch we began to climb again high above the west bank of the Modi Khola.

The village of Chomrong lies at the very base of Huinchuli - a 6336m peak. On entering the tea house yard we were followed by a mule train supplying the village. There was lots of shouting by the mule train driver before the train eventually left. 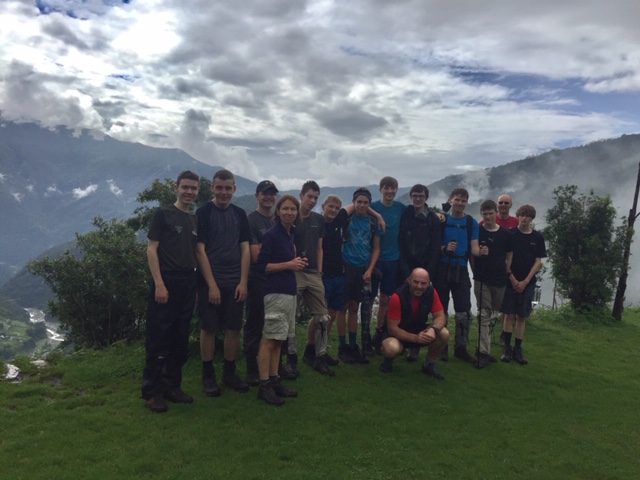 Nine days into the trip and the group had to be up at 5.30 for a 6.00 breakfast so that they had enough time to pack their kit for the prompt pick up at 8am.

The bus journey took 8 hours with a short stop for lunch. It was a really bumpy, windy road through valleys surrounded by looming hills. Every now and then the road turned into a muddy track full of big potholes. 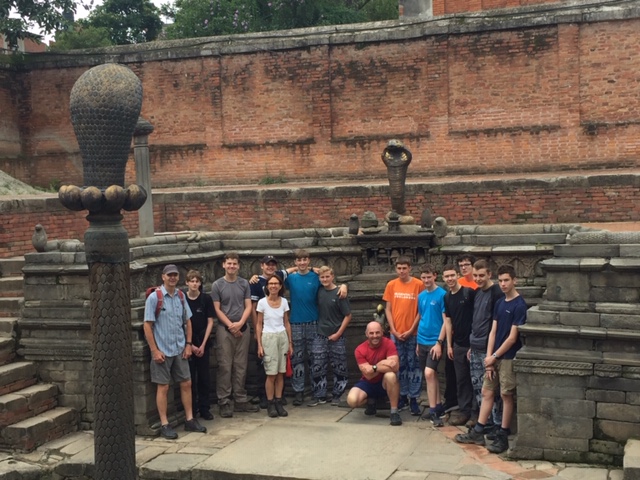 The group eventually arrived in Pokhara at the ‘Hotel Grand’ whose name does not reflect it’s faded facade and rooms. They explored Pokhara  in 2 groups, the group will be here for 2 days before embarking on their trek.

After another early start to the day, the team rose to the challenge of making as much progress as possible with the construction of the school's new wall. Arriving on site after the usual hectic bus journey and walk, the boys battled heat and humidity moving several hundred bricks along their human chain to the builders. This was then repeated with many buckets of sand as the builders resumed their shift. After a water break another truck load of bricks arrived and the task began again. 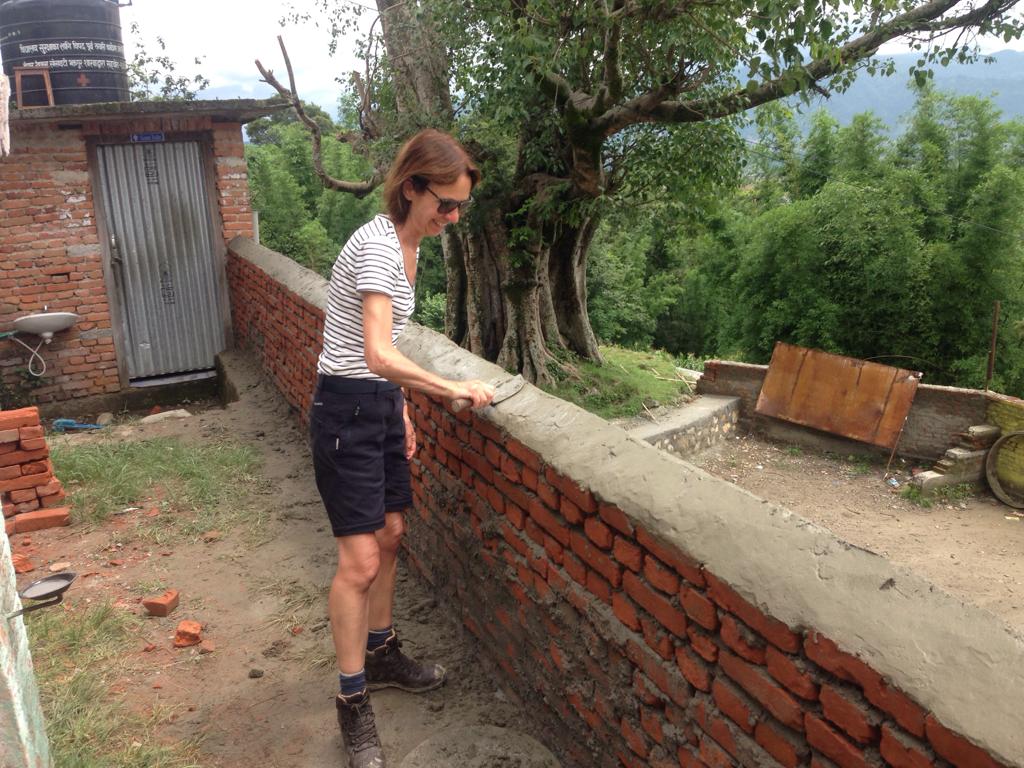 In the afternoon the school community hosted an assembly to thank the group for their efforts. This included the singing of the Nepalese national anthem, traditional dancing and the presentation of certificates and Nepalese hats. In return several of the group spoke explaining what life at More House is like.

On completion of the ceremony, the team noticed that the builders had finished construction of one half of the wall and had started on the other. The wall will act as an important safety measure, preventing pupils falling over a 20ft drop into the play area.

The group are very proud of their contribution.

Kathmandu to Bhaktapur and school project.

The pile of bricks to be moved.

Today we left Kathmandu for Bhaktapur by bus about 1.5 hours away. On the way to the school we dropped all our kit at the hostel and then got the bus carrying only the essentials for the day. The bus dropped us off about 15 minutes from the school as the road became a muddy path so we walked the last part.

When we got to school we were greeted by lots of children, the school is for children from 4-14 years. We then had a greeting ceremony and the Principal put a garland around each of our necks as this is a Nepalese custom when meeting new people.

Once that had finished we started work, moving a pile of bricks and sand so that a new wall could be built as there was quite a drop from the classrooms to the play area. We have local workers doing the building while we are the labourers.

We realised we were in a different country when one of the builders disturbed a large snake!
At the end of the day we had a lovely walk back down the muddy path but this time we had monsoon rain just to make it even more interesting! 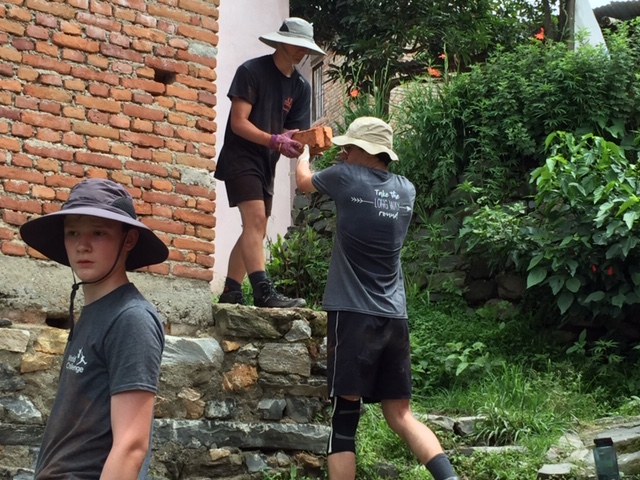 On Saturday the group visited monkey island to find peace and prayers on the little hillock of Swaymbhunath in the northwest of the Kathmandu Valley. Visitors for whom the name was a tongue-twister have called it "Monkey Temple" from the 1970s. Swayambhu, overlooks most parts of the valley, giving visitors panoramic views of the city. The stupa has stood as a hallmark of faith and harmony for centuries with Hindu temples and deities incorporated in this Buddhist site. The glory of Kathmandu Valley is said to have started from this point. 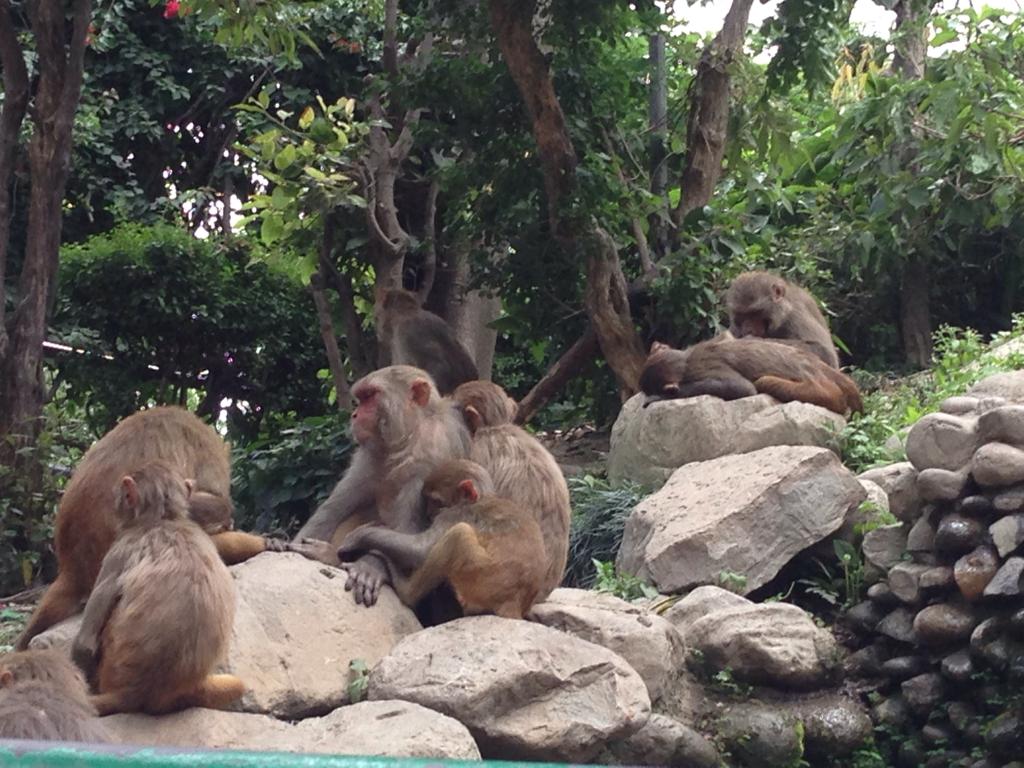 The morning was spent organising money exchange which was expertly done by Ben M, though he has a better plan for next time - everyone to do their own!!

Meetings:  First the In Country Agent, Andrew, who explained the schedule for the weeks ahead in more detail. We also met our guide for the trek, Chongba.

On to a meeting with In Country Project Coordinator, Jeevan, who explained in detail what is going to be useful when the group support the local school. Certainly there is much that the group can do and we look forward to that part of the trip. 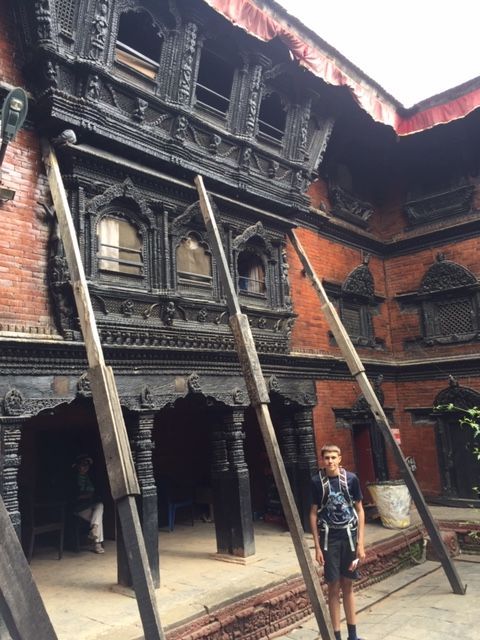 On 25 April 2015, a major earthquake damaged many buildings in the square. The main temple in Bhaktapur's square lost its roof, while the Vatsala Devi temple, famous for its sandstone walls and gold-topped pagodas, was also demolished. They now charge tourists 1000 rupees to enter the Square which everyone was okay with as it all helps towards the repairs.

However there are only so many temples you can look at, so we went up to a cafe roof terrace to get an overview of everything. Here we all sampled Momos, a dumpling, popular across the Indian subcontinent and the Himalayan regions of broader South Asia. Momos are native to Tibet, Bhutan, Nepal, North Indian region of Ladakh, Northeast Indian regions of Sikkim, Assam, and Arunachal Pradesh, and Darjeeling. 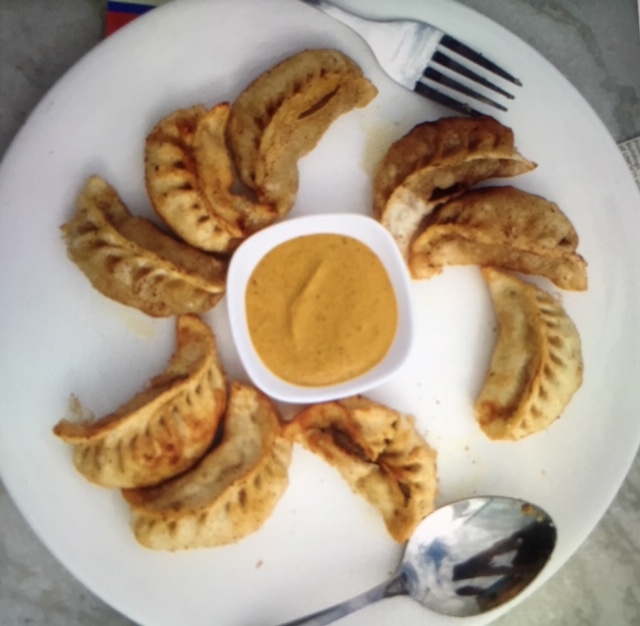 After a long day it was food and bed. Tomorrow: a workshop on Responsible Tourism and a visit to the Monkey Temple.